Welcome to the 8th Annual edition of this post.

I started 2018 in Key West, which is an interesting place, and one that left me with a couple of things to report, but for which I wasn’t able to get a picture.

Actually, the first of those happened in Miami Beach.  Katie and I were walking through a tourist mall and came upon a very thin young woman who was holding a pair of tropical drinks (think “caricature of a big fruit thing with a small umbrella and a long straw sticking out the top”).  She was holding them about chest high.  Katie said (and no, I’m not making this up), “Wow, look at the girl with the huge coconuts!”

It’s a good thing the poor girl was in Miami because Key West apparently is anti-coconut. 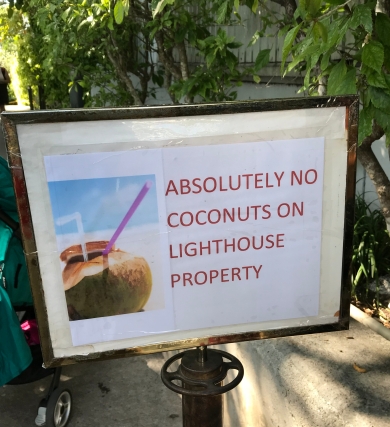 On our way out of Key West, we drove past a sign from these guys:

The sign simply said, “Got Iguanas?”  I’ve been asked many questions in my life.  Whether or not I have any iguanas has never been one of them. 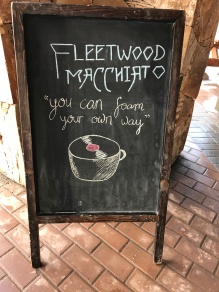 The cake, however, is taken by this couple.  After all, if  you can’t have a little fun with your own imminent death, what can you have fun with?

Nothing says “America in the 21st Century” like the first 2 rows of magazines on this rack.  The one in the back row presumably is there to clean up the mess.

There’s trouble all over the EU, but not at this shop, where everybody just gets along.

This sign sits in front of the National Geographic Society in Washington DC.

So do these pictures.

Perhaps visitors can be forgiven for being a little confused?

Speaking of confused, as a nation, we owe a lot to these two guys.  But if they were this confused about which way to go, it’s a wonder they made it back.

(I owe thanks to someone for sending me this picture, but I can’t figure out who.  If it’s you, please post a comment!)

Let’s say you go to a nice neighborhood restaurant, get a table in their quiet upstairs room, and want to sit down for a leisurely, maybe even romantic dinner.  But no. . .

They really want you to do something here, but it’s not entirely clear what it is. (thanks to Beckie Hayes):

There are just too many ways to go with this.  None of which is clean enough. (Thanks to John Ahlberg) 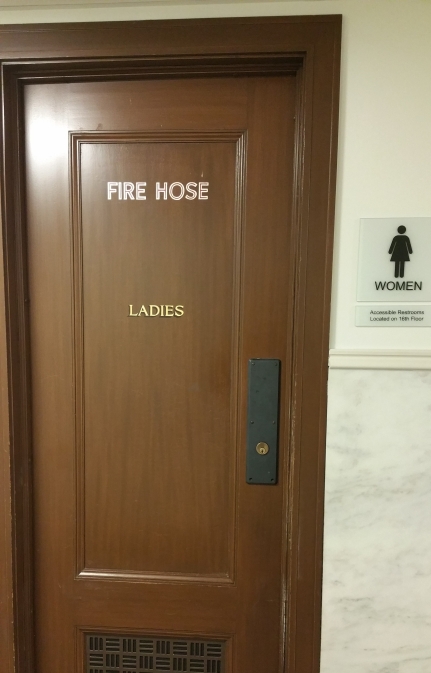 It must be difficult to be famous and to be at war with yourself.

From the Oxymoron department:

This is the aforementioned runt.  He looks like he’s winding up to win a watermelon seed spitting contest.

This is a women’s boutique in NY.  They are currently advertising for a new branding consultant.

“Lassie, put that out, now!  You promised me you were going to quit!”

From the “Remind me what business we’re in” department:

Not to be outdone:

On a “what are the odds” note, let’s say you walk out of a Starbucks, head to your car, and William Shakespeare is sitting in the next car over.  Let’s just say. 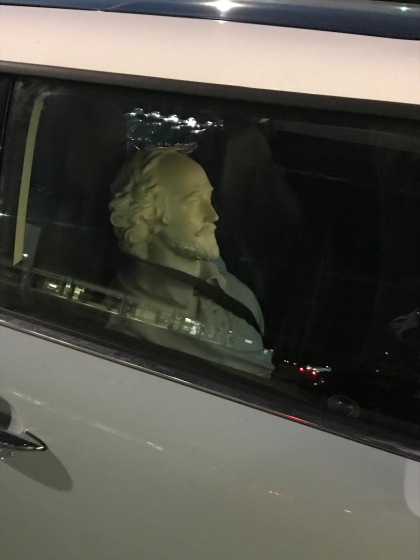 Considering that he was the best wordsmith in the history of the English language, I didn’t find him to be much of a conversationalist.

Speaking of “Look who’s in that car,” I pulled up behind this guy at a freeway on-ramp and saw something white moving around.  I thought maybe he had his dog on his lap, but no.

But there’s more.  I passed him when we got on the freeway, looked over (no picture for obvious reasons), and saw that he not only had the cockatiel you can see above sitting on his shoulder, but had two more cockatiels in his lap.  Three cockatiels.  He was being very affectionate with the two in his lap.  Very affectionate.  I don’t know how else to say this. . .he was driving down the freeway nuzzling his cockatiel(s).

Courtesy of Chris Bowers, here’s a sign that’s both clear and honest. 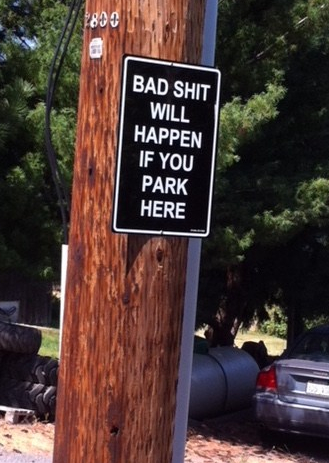 It’s hard to imagine that a pig who earns this honor feels really good it.

Two things to love here:  First, it turns out that pain really isn’t much of a problem.  Second, that podiatrist must be really, really good.

My friend and client Dave Hoglund saw this and said, “What, like ‘Next 20 Miles?’”

Here are two airport sightings of guys who had a lot going on.

This fellow was on a flight I took to Orange County.  A lot going on here, too.

On the return trip, I saw this.  Maybe it was aimed at the guy in the last picture?

I was in Ireland last summer and went to a horse track.  Apparently, not everyone can handle the excitement. 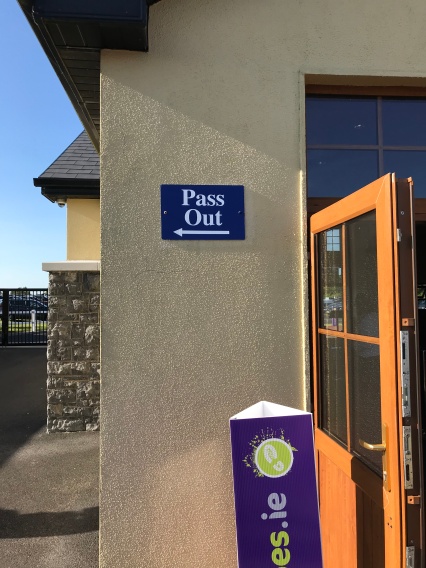 While I was in Ireland, although not at the racetrack, I ran into Donald Trump and Mike Pence.

The NYPD’s budget must be really tight these days. 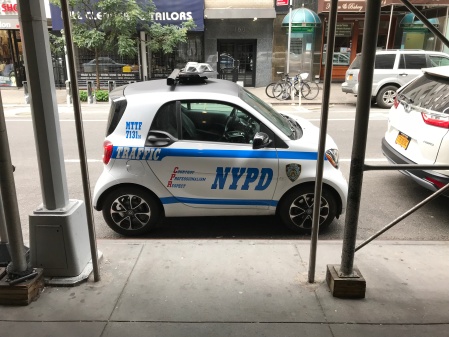 I’d been wondering why this elevator didn’t smell so good.  The veil has been lifted. 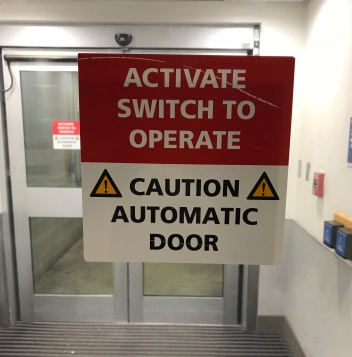 A lesson in basic economics may be called for here. . .

In the “what were they thinking, or were they even thinking” department, this is from a meeting room door in a convention hotel.  Just plain wrong. (Photo courtesy of Mike Paton, a guy whose name frequently appears in sentences containing the words “just plain wrong.”)

And finally, this seems like really useful information, especially if you fly United a lot.

That’s what I have for you.  I hope you found a thing or two to smile about.

And with that, I wish you a 2019 that brings you as much health and happiness as a human being can have, and as much prosperity as you want, and brings me enough good pictures to do this again next year.