This is now the fourth consecutive year for this photo missive.  One of the benefits of it becoming a habit is that I’m starting to get photos from friends and family, for which I’m truly grateful.  Takes some of the pressure off.  I’m also grateful for the good fortune of a great scene that presented itself with only 40 minutes left in 2013.  But you’ll have to read on to find it.

The following four pictures are all from a single trip to visit a client in Milwaukee.  When I visit that client, I stay at a Crowne Plaza hotel, which is basically an overdressed Holiday Inn.  Nothing wrong with that – it’s clean and comfortable, and the staff is very nice.  But while Doubletrees give their guests a couple of cookies so good you know they have to be bad for you, the Crowne Plaza, gives you this:

The blue bag looks suspiciously like something you might take with you while walking your dog.  On my next visit, the Keebler cookies were gone – replaced by a second bottle of water.

Driving back to Chicago, I saw this sign on a building just off the freeway.  It’s my favorite of the year – does the best possible job of explaining why you wouldn’t want to be this company’s customer. 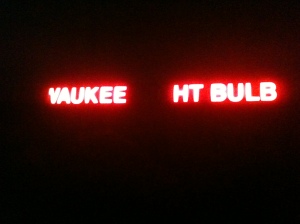 A little further south, just before Kenosha, I came across this.  It’s Wisconsin and there’s a party goin’ on. 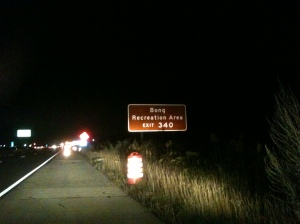 (OK, heroism should get its due.  My friend Cliff Porzenheim points out that the sign actually refers to Kenosha native Dick Bong, who was America’s leading fighter ace in WWII.)

When I got to Kenosha (land of the BoDeans and a zillion outlet stores), I stopped to grab a bite at the Tuscany Bistro, which I recommend, by the way – it’s terrific.  And run by people with a sense of humor.  It’s Wisconsin, and there really is a party goin’ on. 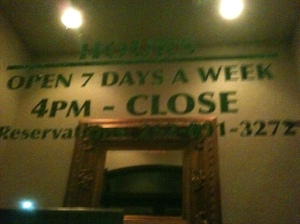 If you can’t make out the name of the company, it’s Key Sales, Inc.  Apparently, they can dish it out, but they can’t take it. 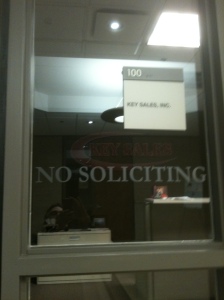 My daughter, Julia, spotted this sign at the Wal-Mart in Hayward, WI.  Might they be better off simply not talking about their safety record?

Here, thankfully (and thanks to Victoria Woodarski) is a little truth in advertising.  You gotta love the phone number.

And courtesy of Scott St. Clair, here’s a smart buy for the not-so-smart. 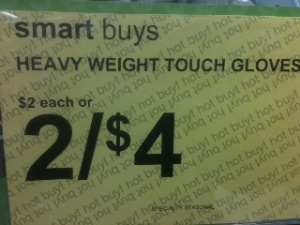 If you’re tired of your kids, my friend Steve Smolinsky found out where you can take them.  Of course, if they don’t sell, you may have to take them back.

A couple of travel tales this year:

In January, I visited my daughter in Puerto Vallarta, where she was volunteering in an orphanage (yes, she has a very proud dad).  We took a bus to a nearby town, where we found these people waiting to take the bus back the other way.  I kept hearing a clucking sound, which turned out to be coming from the box in the middle of the picture.

I go to Detroit once a quarter to visit with my friends at EOS Worldwide.  We meet at the Detroit Airport Westin.  I’m glad I’ve never been given this room, which I suspect is the 10th Circle of Hell.  Note the Do Not Disturb sign.  Demons at work, I assume.

There used to be just a few of us at the EOS meetings, but now there are so many that the EOS folks give us really fancy name badges.  Here’s the back of one.  Care to guess what led to the badge-maker adding this legend?

This sight raised a bunch of questions.  Starting with who thinks of things like this?  And who buys them?

An aside: I had Tetra as a client many years ago.  Their HQ and factory are in the tiny, landlocked town of Melle, Germany.  By tiny, I mean that the only sources of economic activity are the Tetra plant and a Chinese restaurant. It seems like an extremely unlikely location for both businesses, and I have no idea how either one got there.  Thanks to the factory, the entire town smells like fish food.  So it really doesn’t matter what you order at the restaurant.  Like it or not, you’re ordering from the seafood menu.

In the automotive category, I was on my way to have lunch with my friend Julie Roth when I saw this.

Yes, that’s an Aston Martin parked in a handicapped spot.  To the owner:  You can afford the car but you can’t afford the valet?  James Bond is going to get you for this.

I saw this while stuck in traffic on the Eisenhower Expressway (a classic misnomer – there is nothing “express” about it).  I swear, I wasn’t moving when I took the picture.  Completely safe.  Really.  That’s my story.

It’s a little hard to see, but that thing in the right front seat is a giant, orange plastic cockroach.  There has to be a story behind this.  I mean, I don’t know about you, but I’ve never been in a situation where the right thing for me to do was put a giant plastic cockroach in any part of my car, let alone in the passenger’s seat.  Worse yet, the cockroach was sitting feet up, head down, and the driver was smiling.  You want to fill in the blanks?  I don’t.

If you’ve been following my year-end posts for any length of time, you know that I have an undeniably juvenile appreciation for restroom humor.  Perhaps it’s because the water closet is one of life’s great equalizers.  Or maybe it’s just because I’m undeniably juvenile.

Whichever, I saw this sign while trying to find a restroom in Mexico.

And this one somewhere else, maybe on an airplane.  With signs like this, I always wonder what set of events made someone decide it was necessary.  In this case, I think it was the milk bottle that caught my eye.

Speaking of wondering what made someone decide it was necessary, I saw this at a Doubletree (yes, the cookie people).  I’d never really thought about what goes into a decision to enter a public restroom.  I guess I’ve always been satisfied simply to know that it was intended for my gender.  Apparently, that’s not always enough information.  I suspect (for the obvious reasons) that this isn’t a standard sign.  Which means somebody thought about this, decided it was important, and had the sign made.  Someone else paid that person to do it.  Perhaps this is the OCDoubletree. 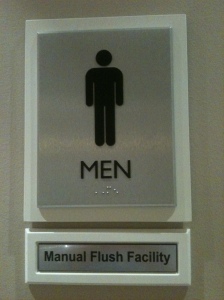 This logo made me want to run right out and by the stock: 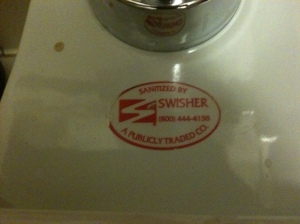 Imagine what the analyst call with the CEO and CFO is like:  “We’re pleased to report that primary demand is up thanks to increasing coffee consumption. . .”

And finally in this category – I got this piece of spam from what appears to be the Vietnamese version of Home Depot.  It was entirely in Vietnamese except for one word.

Using that as a segue to technology, I found this bit of brilliance while looking for some free Wi-Fi: 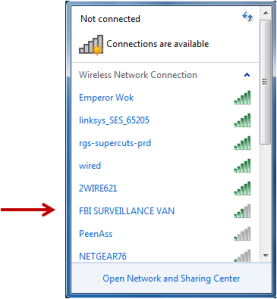 Now go back and look at the Wi-Fi network below “FBI Surveillance Van.”  Someone was in a bad mood the day they set up their router.

On a much happier note, nature loves a plastic surgeon with a sense of humor.

Here’s a bit of pith from the Russian playwright Anton Chekov.

Editorializing briefly:  I’ve sat through a Chekov play.  Once.  Which was enough.  If you want to know what REALLY wears you out, give that a try sometime.

This is my dog, who doesn’t offer much comfort but has no problem accepting it. 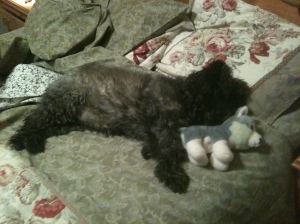 And finally (thank you for your patience), there I was at 11:20PM on New Year’s Eve, getting my car out of the alley behind my friends Anne and Doug’s house.  It was 15 degrees, snowing like mad, and this guy came down the alley.  There’s just never a St. Bernard when you need one.

Thanks for visiting.  Happy New Year – I wish you a wonderful 2014!