Here it is – Year 7 of the photo blog.  This year, I had 94 pictures to choose from, including a few that were sent by friends and (gasp) family.  I decided to keep it clean – strictly PG. Except, of course, for when I didn’t. Which means that the hardest part of this job is bottling up my inner 13-year-old.

Just remember that this is all about how people express themselves.  Including me, I suppose. And that if you want to see what I left out, I have nowhere near enough self-restraint to stop myself from sending it to you, so just let me know.

I start every year afraid that I’m not going to get anything good, and yet somehow I always do.

And so, our journey begins on January 2, 2016.  I’m in the airport in Huatulco, Mexico, heading home from a holiday warmup (where I was surrounded by Canadians whom I kept assuring over and over that Donald Trump was just a sideshow whom American would never actually elect).  And there, in the airport, I see these two signs:

Here’s the thing. . .one of them points to the airplanes and the other to the restrooms.

Check out the t-shirt and imagine your dog coming home from one of those treatments.  It would either be “Ahhh. . .” or “Dude, what the hell?!?!?”

CNN’s mobile app turns out to be good for a laugh or two.

I’m wondering if anyone at the Seattle Aquarium bothered to consult their octopi before this decision was made:

Online ads are targeted, right?  So why did I get this one? 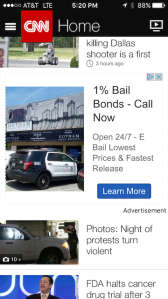 When you open the CNN app, it takes a few seconds for the pictures on the top story to catch up to the headline, which yields some pretty interesting results.  There is nothing – absolutely nothing – I could say to improve on this one:

In local news, this used to be a terrific steak house.  It was located in a retired fire station near where I live and was called, appropriately, The Firehouse.  It was great – right up until it was. . .you guessed it. . .gutted by fire:

In less local news, I spent a little time in Northern California last summer.  This is a spot on the Cal Berkeley campus.  If you can’t make out the sign, blow it up until you can.  And then note that every sign in the row is the same.  Show-offs.

I’m not sure why Napa Valley needs this, but apparently it does.

I always thought it would be good to have this much money, but I never imagined it would fit on a single bill (yes, this is real money):

I didn’t go in this place.  Like you, I’m thinking that maybe I’d rather have food that was fresh? 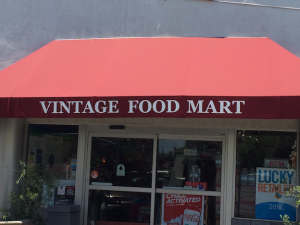 And what, exactly, does this place bake?  A Revell 1/24th scale Ford Mustang?  Cindy Crawford?  I wish I knew. 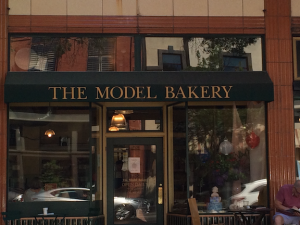 The next part of that trip was on the Island of Hawaii, which yielded these. . .

Nothing quite says “Polynesian Rain Forest” like a band of Scandinavian marauders:

. . .except that what’s smoldering in the background is the crater of an active volcano.

Back home.  Last year, I shared a sign from a frozen yogurt shop that I stop into now and then.  It said, “From now on, you must have intent on purchasing a yogurt to have a sample.” (Sic, sic, sic.).  Apparently that wasn’t enough to get them the customer behavior they were after.  So they upped their game.  A single trip yielded these.  (Note – halfway through, you are going to say to yourself “Really?”  The answer is “Yes.  Really.”): 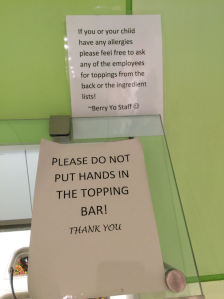 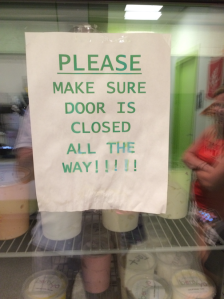 By the way, this is what greets you inside the front door.

In fairness, I have to say that the frogurt in this place is quite good, and it’s one of the few that has low/no-sugar options.  But there has to be a less stressful way to make a living.

The word choice on this street sign is interesting.  But wouldn’t “Rain” have been simpler and more to the point:

. . except that that the place down the block – the one with what looks like a small clock tower – is called Mario’s.

On a summer bike ride on the Lakeshore, I passed a sign saying that the under-construction bird sanctuary I was passing would soon be complete and ready for use.  That got me to wondering how the birds would find out that it was available.  The best answer I could come up with:  “They’ll Tweet.”

On that same ride, though, I failed in my attempt, after my January start in Mexico, to avoid bathroom humor for the rest of the year.  And I believe in failing big.

This sign sits above a urinal in a Chicago Park District restroom on the Lakefront, and it makes me worry about many things, including the state of civilization.

Let’s pause here for a second.  I’m always curious what the meeting was like where something like this got approved.  Like the marketing meeting from last year’s blog, when the bike company decided to put the words “Perineal Safety Area” around the opening in the bicycle seat.

I mean, let’s be clear.  I’m sure there’s a risk associated with the fact that the water is untreated rainwater.  But there’s also a risk that if you tried to drink it, you might, while bending over to take a sip, see an image in the water that you thought was Madonna – the singer, not the Blessed Virgin – faint from the shock, hit your head on the concrete and die of a subdural hematoma.

If I had to guess, I’d say the rainwater risk is smaller than the Madonna/hematoma thing. But they’re both pretty small.  And then there’s the fact that the water is in a urinal.  As my dog said when I brought him home from the chiropractor, “Dude, what the hell?!?!?”

But why am I worrying about that?  What I should really worry about is the strange looks I get while taking photographs in public restrooms.

On a separate adventure that was not supposed to involve plumbing, I was in a Lowe’s store and came face-to-face (or maybe it was face-to-bowl) with Kohler’s marketing strategy, which apparently involves giving toilet models profound, thought-provoking names. Like this: 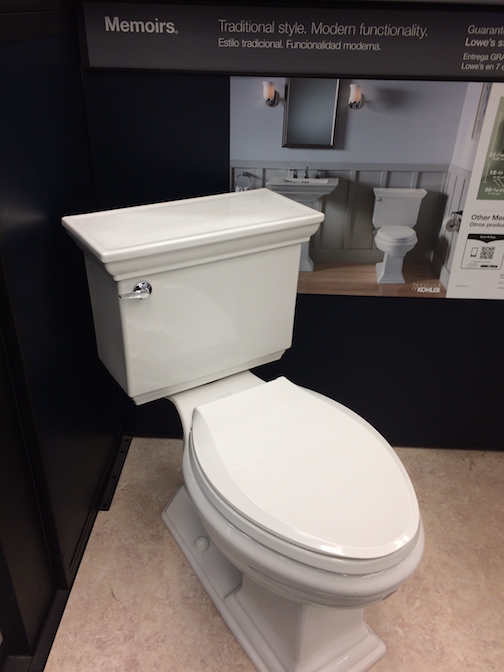 There were two other models I didn’t get pictures of (yes, I actually started worrying about attracting unwanted attention).  One was The Cimmaron, which given it’s Western-ish name, seems it should be more outhouse than in-house.  And defying all explanation, there was the pièce de rèsistance, the sine qua non, the toilette de toilettes – The Biscuit.

And may that be the end of bathroom humor.

But nothing is off limits – or for that matter, private, let alone sacred – anymore.  And so I found this billboard on the road from New Buffalo, Michigan, back to Chicago.  No, not Carl’s Truck Repair.  I love the red circle with the slash through it and the Buy One – Get One Free offer.

From my friend and colleague Rene Boer – a picture he took on a beach in Belize.

If you can’t make out the little yellow sign, it says “Closed for Vacation.” 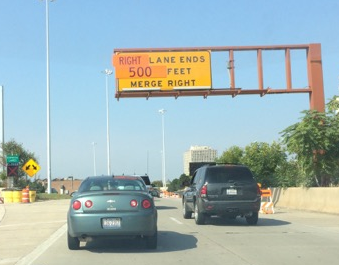 And from my daughter, Julia, this bit of grocery store irony: 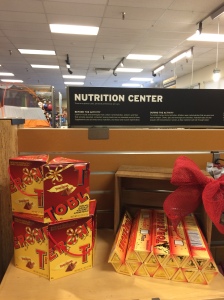 From this year’s holiday warm-up in Miami:

This store in Miami Beach might be owned by a brother and sister?  If so, they have a sense of humor.  I hope so, but I don’t know.  And they don’t have a website, so I can’t look it up.  Or see what they sell.  All I can say is that the name and the subtitle kind of contradict each other.

As the colors might suggest, this sign is by a guard house at the University of Miami.  I’m still trying to figure out exactly whom it excludes from entry:

And finally, for anyone who lives in Chicago (and probably many other places), there’s this: 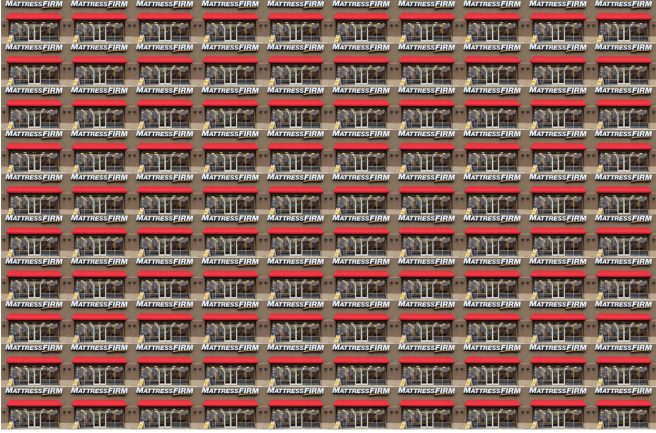 That’s it for this year.  I hope you found something in here to give you a laugh.  And I wish you a healthy, happy, prosperous 2017.